Jamie Markle has always had an eye for color, for design and for materials, knowing how to put things together in new ways and how to reach out to the viewer and grab their attention.  Markle started his painting career during college, due to a cancelled art therapy program and a passion for painting and drawing.

His skills as a designer and an eye for public interests led him on a lengthy journey from product development at a clothing company to his present career, and path back to the arts, as a group publisher for F+W Media, the company that produces North Light Books, The Artist's Magazine, The Pastel Journal and Watercolor Artist, along with many other publications and websites for artists.

Much of Markle's current work is in mixed media, but he also still does quite a bit of figure drawing and oil painting.  In his oil paintings, Markle tends to use flat brushes and filberts for his work, 1" size and under.  As he works on an easel, Markle often steps away from his pieces to work on the perspective and overall layout, so he prefers long- handled brushes that allow for measuring and changing his grip.  Changing the grip from the end of the brush or close to the ferrule allows for different types of strokes, for laying the paint on the canvas in different movements, creating the flowing work that Markle is known for.  Markle says his work is influenced by the modern artist, Robert Daughters and the Impressionist painters, their clear strokes of color defining shapes and shadows.

Markle's mixed media work has a similar feel to his oil paintings, rich line work, brilliant color and a sense of familiarity with the subject, influenced somewhat by Egon Schiele.   Even though much of his mixed media work is collage, Markle believes that brushes are just as important in this work, especially those that are wide to carry glazing, top coats and gesso.  He suggests that every artist carry a good gesso brush as this is the foundation for a painting.  Markle also recommends that beginning artists carry a range of flats and rounds while considering the scale of what is being painted, which will alter what sizes one chooses.  Filberts, he says, "will also help create definition and sharp edges in oils."

Some of the new Paddle brushes that Dynasty has coming out in Michael's would be good considerations for doing mixed media work, glazing, gessoing or top coats, as they are wide flat brushes.  I'll share more about these cool new brushes next week.

In the meantime, to learn more about Jamie Markle and his work, visit his Facebook Page. 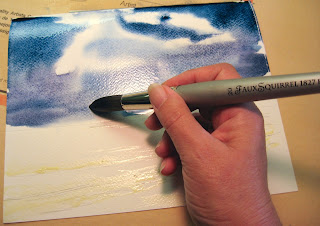 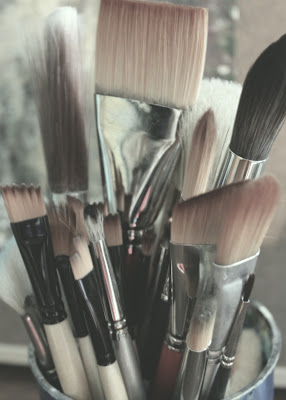 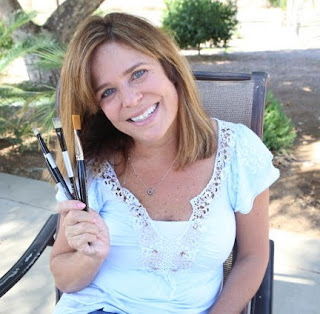 Art journaling is a becoming a popular way to keep creative and practice self-care. We recently asked Dynasty Artist Tracy Weinzapfel for some insight about her approach to art journaling and she was lovely enough to share her knowledge here. Keep reading to learn more about how to start your own journaling journey and how to enter our very special contest! Artist Tracy Weinzapfel All photos here appear courtesy of the artist. How long have you being making art?    "I have been making some sort of art since I could hold a crayon. I was content to be coloring all day. I wanted to pursue Art or Architectures but earned a Bachelor's Degree in Building Construction Management from Michigan State.  My parents encouraged me to get a degree to fall back on and then pursue my passion which I am glad they did!"     What led you to art journaling and what do you get out of it?    "I have done all sorts of art mediums including canvas, wine barrels, w